A friend mentioned entering something called a Flash Fiction contest on a website focused on writing in the recently re-popularized Zombie genre. I must confess, my wife and I enjoy cuddling up to watch The Walking Dead after our wee one is asleep, and the idea of entering this competition intrigued me.

Entries were to be Zombie stories with a twist. They could only be 250 words or less in length, and must include one of several preselected lines from Night of the Living Dead somewhere in the story. My quote was, “This is no Sunday school picnic!”  I opened the second paragraph with that.

Being a daddy blogger, my entry takes a slightly different tack than most. I haven’t written fiction in quite a while, and never anything in the horror genre, so it’s unlikely I’ll win, but I’d love to know what you think? Be warned, there are brief, non-graphic mentions of violence. 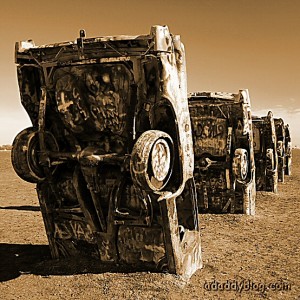 She Could Do This

The minivan is a blur as it hurtles past the graffiti covered monoliths of Cadillac Ranch. If the driver even noticed that Old Route 66 landmark, its nostalgia was lost on her. Nostalgia has a whole new time-frame now; not decades or centuries, but days and weeks.

This is no Sunday school picnic! Freshly torn flesh on her leg ached, her head ached, everything ached, but she kept the gas pedal to the floor. She’d been bitten 20 miles back while siphoning gas. No matter. She was almost to safety. She could do this.

Squinting ahead in the late afternoon sun, she made out the high fence, its rolled razor wire glinting in the day’s last light. A faded American flag was hanging impotently from a pole by the gate. Her foot never left the gas as the minivan ripped the gate from its hinges.

They came quickly, men in fatigues, weapons raised. She brought the vehicle to a dusty, lurching halt. Stepping from the minivan a final hazy thought repeated in her head, “I can do this. I can do this…” Ignoring their shouted warnings, she limped toward them.

Later, they reported she had smiled at them kindly as their bullets ripped through her. Her soulless body crumpled to the dirt, and they turned to the minivan behind her, its engine still idling. Inside, a toddler slept unharmed in his car seat.

She had done it.