Household Dangers – 5 Things to Watch Out For!

Jessie J Wants to be Part of Your World

Watching the Film “He Named Me Malala” with Children

Why See the Film He Named Me Malala?

The film fosters awareness of issues surrounding the importance of girls’ education and shows how the ordinary person can take action to help girls around the world. The film tells the story of Malala, and her struggle to make education for girls a worldwide right!

Malala was born on 12 July 1997 in Mingora, a town in the Swat District of north-west Pakistan. Her father, Ziauddin Yousafzai named her after Malalai, a Pashtun heroine.

Ziauddin, who has always loved learning, ran a school in Swat adjacent to the family’s home. He was known as an advocate for education in Pakistan and became an outspoken opponent of Taliban efforts to restrict education and stop girls from going to school.

Malala and her father received death threats but continued to speak out for the right to education. Around this time, Malala was featured in a documentary made for The New York Times and was revealed as the author of a BBC blog.

On 9 October, 2012, as Malala and her friends were travelling home from school, a masked gunman entered their school bus and asked for Malala by name. She was shot with a single bullet which went through her head, neck and shoulder. Two of her friends were also injured in the attack.

Malala survived the assassination attempt, and spent many months in recovery and then continued her fight on behalf of all girls denied an education!

Malala is the youngest person to ever to win the Nobel Peace Prize!  When she won the prize last year at 17 years old! 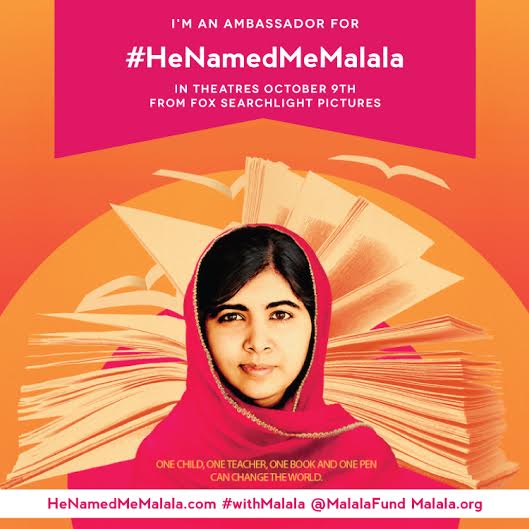 What if you don’t know how to approach the subject matter with your kids?

It may help some children to talk about what the film covers before viewing He named Me Malala. And parents can get help from the Parents Guide to the film! It covers the history of the geographical area that the film takes place in, as well as giving warning about what parts of the film might be emotional or considered graphic by some younger viewers.

Check out the Parents Guide Here:

Still Wondering if He Named Me Malala is for you? Check out the Trailer!

Where can you find more information on Malala, and the work her foundation does?