I know many of my fellow Disney addicts already have already seen this. Have you? In Disney’s Academy Award winning movie Frozen, there’s a bit of a mash-up in which Rapunzel and Flynn Rider can be clearly seen entering Arendelle for Queen Elsa’s coronation. What other Easter Eggs have you found?

I said they can be “clearly seen”. That’s not really accurate. I definitely did not see it during our two viewings of Frozen in the theaters. Did you? But now that we have it on DVD and BluRay I can run it in slo-mo and it’s easy to see them as they stroll past Princess Anna during her “For the First Time in Forever” song. 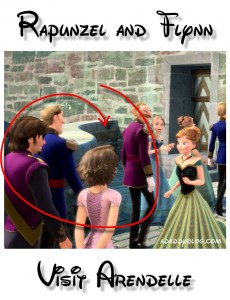 In case you haven’t seen it yet, I’ve captured that scene above. There’s also a hidden Mickey (a little plush doll) on one of the bottom shelves in the Wandering Oaken’s Trading Post scene. Again I’d have never seen it had it not been pointed out. I’ll bet there are tons more? What else have you found?

I was just asked on Twitter when this scene happens. It’s during the song, “For the First Time in Forever”. When Elsa sings, “Tell the guards to open up the gates!” Watch closely as Anna goes out the gates. It’s really quick, but you can see them if you watch bottom left of screen.

Rapunzel enters first followed immediately by Flynn on her left. Remember, when Flynn cuts Rapunzel’s hair in the movie Tangled, it turns from it’s magic golden color to it’s real color. So she’s a sporting a cute short brunette haircut. Here’s that tweet and another photo:

When Elsa sings, “Tell the guards to open up the gates!” @NurseLovesFarmr As Anna goes out; watch the bottom left of the screen. pic.twitter.com/gxV1qmR62b