As a dad, I’m happy to report we need not resign ourselves to that sea of hum-drum mini-vans and SUVs that prowl our suburbs. The 2013 Ford Flex is unlike anything I’ve driven. Is it a great family mover? Yes, and so much more. The standard seating layout includes 1st-row bucket seats, 2nd-row 60/40 split bench seat and 3rd-row 50/50 split bench seat for seven-passenger seating. 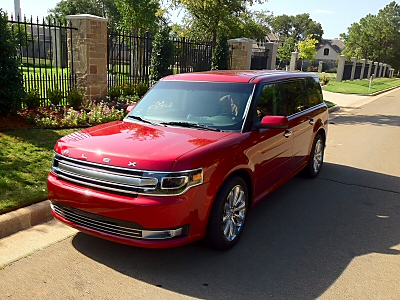 The 2013 Ford Flex Limited I drove had a six-passenger configuration, with 2nd-row bucket seats, with optional center console complete with a refrigerator/freezer! Front row heated seats come standard in the Flex Limited, and something I really liked while driving the Flex in the Dallas heat, they now have an available cooling feature in those front seats as well!

Ford isn’t kidding when they say the 3.5L EcoBoost V6 Engine has the power of a V8. It’s incredibly responsive for such a large vehicle with no turbo lag when you step on the gas. I do have to say, if you are looking for a super high mpg car, Ford has a number of better choices; the Flex I drove yielded approximately 17 miles per gallon during mostly in-town driving.

As I mention in the video, my first impression of the Flex when I saw it on the road a few years ago was, well, it’s kinda boxy. Since then, the looks have really grown on me. This is not your mommy’s minivan! I’d even go so far as to call the Flex rather sexy. Hey, I’m a guy; we care about stuff like that. At least I do. And we guys also like our technology…

The 2013 Ford Flex I drove was equipped with a Navigation System that provided voice-guided turn-by-turn directions. The SiriusXM satellite radio was paired with a Sony audio system that pushed out 390 watts of power, including a rear sub-woofer! Upon entering, it also synched my iPhone via Bluetooth allowing me to place calls and select music with voice commands. 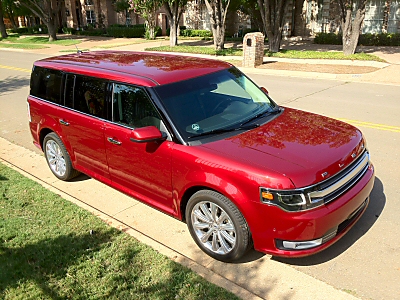 Visibility out of the Flex with its large windows all around was quite good. The one I drove also had a feature I think should be standard in all large vehicles; it had a rear-view camera that came on automatically when I put the car in reverse (see the video) that could literally be a life saver. Hate parallel parking? The Flex’s active parking assist will make that a snap. Very cool indeed.

Let me wrap up by saying the category defying 2013 Ford Flex is one super family mover. If you’ve been thinking of buying another minivan or SUV you owe it to yourself to give the Flex a test drive. I expect that you, like me, will come away quite impressed with the quality, comfort and flexibility of this great family vehicle.

What do you drive or recommend for a family car?

Note: Ford was kind enough to let me spend a week test driving this car. I was not compensated for this post, and the opinions are solely my own.