5 Things Parents Need to Know Now about the Flu

Wait for me, Daddy

Another not quite Wordless Wednesday…

I fear that becoming a dad has turned me into a bit of a softie, at least as far as kids are concerned. I ran across this photo on Pinterest. It had been pinned from some random Tumblr account with no details about its source. They say a picture is worth a thousand words, and this one certainly speaks volumes.

It’s pretty clear the boy has tugged away from his mom and is reaching for his dad who is in this column of soldiers apparently shipping off to war. I guessed it was World War II by their dress. I became mildly obsessed with the people in the photo, and wanted to know more. Did the dad make it back? 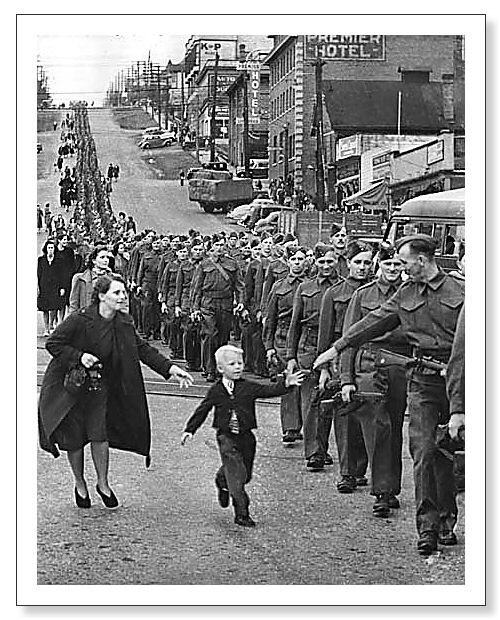 Eventually I traced this to photographer Claude P. Dettloff, who took it on October 1, 1940. The line of soldiers were The British Columbia Regiment, shown as they marched down Eighth Street at the Columbia Avenue intersection in New Westminster, Canada, on their way to a waiting train.

Claude very appropriately named this photo, “Wait for me, Daddy”, because, as it was being taken, a young five-year-old Warren “Whitey” Bernard tugged away from his mother, Bernice, to reach out for his father, Private Jack Bernard. I love the smiles on the soldiers just behind Private Bernard.

So that told me who it was in the photo, but what became of that father and son? I found out. The regiment was eventually sent to France and the Netherlands. Unlike so many who never returned to their loved ones, I’m happy to report Private Jack Bernard made it back to Whitey at the end of WWII.

If little Whitey Bernard is still alive, he’d be about 78 years old now. I’m not sure why it mattered so much to me, but I was glad to find his dad made it back home to him. On that note I’d like to add, to all of our brave men and women in harms way right now, get home soon, and get home safe. Godspeed.